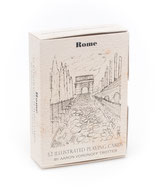 I visited Rome to walk in my grandfather's footsteps. He studied landscape architecture there in the 30s. I still have his sketchbook, journal, and photos from 3 years in Europe. This deck  version of Rome: The Pantheon, the Colloseum, Piazza Navona, Trevi Fountain and many more. Originally sketched on location during the rains of March.

For 2 weeks in March 2013 I explored the Eternal City with the purpose of drawing 52 places.  My hope was to capture the feeling of the ancient city in my sketchbook and later produce the collection as a deck of cards to be played and displayed.  Based near Piazza Navona and the Pantheon, I set out every morning to visit the ancient monuments and famous landmarks, always curious to find new places, looking hard at everything.  Although it was cold and rained for most of my first visit to Rome, I was still able to collect most of the images I needed.  I returned a few weeks later after visiting France to complete the sketches.  By that time the weather was much warmer (after Easter) and the tourists had swarmed over the city in such a way that my sketching process was seriously challenged, due to the great mob of tour groups and screaming children.  Dodging motorbikes with gelato in hand, I drew as much as I could in the last few days of my trip, composing some of my best drawings.

The background design for the Rome cards is from a watercolor sketch that my grandfather made during his visit to Rome in 1934.  I wanted the drawings themselves as well as the paper to look old and partially reconstructed, like the ruins appear today.

All drawings were originally sketched on location in Rome without the aid of a photograph.  The drawings were completed with pen and ink in Portland, Oregon at Alberta Studios (1627 NE Alberta St.)  Suits and numbers are an original hand-drawn border template made by the artist for Illustrated Playing Cards.  Boxes are offset printed and die-cut.  Each box is signed, numbered, and folded by the artist.  Cards are digital prints with a UV coating, printed and cut square, round-cornered and shrinkwrapped in-house.

For most of my life I have been fascinated with Roman history.  I grew up hearing about my grandfather Morris Early Trotter’s 2 year stay in Rome with the American Academy from 1933-35.  His studies and later profession focused on Landscape Architecture.  His trip to Europe included an odyssey by car and bicycle through Italy, Germany, the Netherlands and Scandinavia.  On his return boat voyage to America, he stopped on the island of Mallorca.  There he was fortunate to cross paths with a beautiful Parisian named Natasha Voronoff, a woman who became his wife and my grandmother.  They married a few years later, and for their honeymoon took a year-long trip around the world by sea.  In 1937 they visited Hawaii, Japan, Bali, Thailand, India, Egypt, and Europe before returning to Washington, DC.  They are my great inspiration for traveling the world.