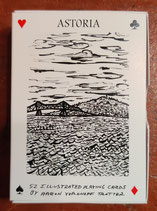 Made to celebrate Astoria's Bicentennial in 2011. I decided to create a special birthday gift for a 200 year old city.  During 3 visits (from my home in Portland), I composed enough sketches of Astoria to make a deck of 52 Illustrated Playing Cards.  It is part of my Pacific Northwest series which includes Portland, Seattle, and Vancouver, B.C.  Each deck features famous landmarks and neighborhood places.  To find the places that are included in this exhibition, I studied the tourist maps, talked to locals at Ft. George, and got advice from a barista for the main targets.  But sometimes the places just found me as I walked around exploring.  Some buildings spoke louder than others, like the abandoned Flavel house.  Along the Riverwalk, I was surprised by the wildness of the Columbia as a dramatic contrast to the tranquility of the river in Portland.

My drawings are influenced by the Renaissance etchings of Albrecht Durer and the 19th century books of William Morris.  I draw on location, sketching the composition with a ball point pen.  Later I embellish and crosshatch the details at my studio in Portland, using my Great-Aunt Ethel’s 1910 ink pen.