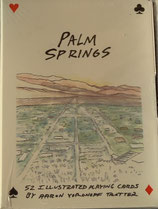 Featuring famous landmarks and scenic viewpoints in Palm Springs, Joshua Tree, Mojave, Route 66, and the Salton Sea. Sketched with pen and embellished with watercolor pencils, this collection is inspired by the springtime colors and fantastic vistas of the desert in bloom. Use this art object to play a game, start a conversation, inspire a new road or trail to take. Includes 4 map cards and an index that corresponds with each card.

See the whole article at : https://www.desertsun.com/story/news/2022/06/21/oregon-artist-aaron-trotter-makes-palm-springs-playing-cards/7564597001/ thanks to Julie Makinen

Aaron Trotter hasn't drawn all the cities of the world. "But that's my plan," he says.

It was February, the time of year when Trotter's home base of Portland, Oregon, is "cold and dark and gloomy," the 44-year-old artist said. "That's when everything's closed up here in Portland. And I usually just spend money in the winter."

So he packed up his black, 2015 Volkswagen Jetta and headed south to California. His destination was Santa Cruz, where he would sell some of his wares — hand-illustrated playing cards of locales from Paris and Rome to Seattle and Mexico City — at a street fair.

"And then I just kept driving," he said. "And because I'm from the Northwest ... I was just seeking the sun." He had heard about Palm Springs' weekly street fair, VillageFest. "I had to check it out. And I saw it, I saw the people there, and I was impressed and I thought, 'Oh, well, I belong here. My booth should be there, right there.' Because I've done lots of street fairs and I'm always up for trying a new one. So I started sketching the city."He went to the Palm Springs Visitors Center on North Palm Canyon Drive and picked up a map of key local sites. Sketchbook and pen in hand, he started hiking and walking all over the Coachella Valley.

After that week, and a second trip back to the desert in March, he had created dozens of sketches, enough to create a Palm Springs-area card deck — each card illustrated with a scene from the region.In some ways, art was in Trotter's blood. His father is a sculptor, and his grandmother was a potter and mask-maker who would sell her work at art fairs. "That was the early inspiration for me as a child, seeing my grandma selling her artwork," Trotter says.

After graduating from an arts high school, Trotter attended Evergreen State College in Olympia, Washington, where he studied liberal arts, focusing on 20th-century art and Cubism, plus surrealists and Picasso.