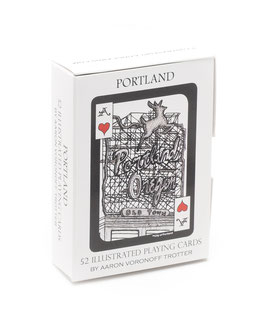 This is the FIRST deck that started the whole thing; originally released in 2010. Collecting 52 landmarks and neighborhood places including: Powells, Voodoo Doughnut, Portlandia, Burnside Bridge, cafes, bars, and other typical scenes. Includes an index and artist statement.

Portland artist Aaron Voronoff Trotter has drawn more than 200 sketches of the city, many of which will be on display at the Architectural Heritage Center this month. He says there are still more places to sketch.

'I'm going to draw the cities around the world,' says Trotter, 33. 'My plan is to make a world series.'

So far, Trotter has drawn illustrations of scenes and notable locations around Portland, Seattle and Vancouver, British Columbia, as well as Astoria, and parlayed them into sets of playing cards. He recently visited San Francisco to sketch, and plans a new set of Bay Area cards. And, he'll visit Paris in March and produce a set for the The City of Light.

Trotter, who studied at Arts and Communication High School in Beaverton and attended Evergreen State College in Olympia, Wash., says he has sold about 6,000 sets of playing cards, thanks to strong holiday sales - at $20 each, it's not a bad chunk of money for his business, Illustrated Playing Cards. His 54-piece work of our city, 'Portland Places,' will be on display, salon-style, at the Architectural Heritage Center, 701 S.E. Grand Ave., starting with a 6 p.m. First Friday, Feb. 3 kickoff and extending to March 31. An artists' talk is scheduled for 6 p.m March 2. Go to visitahc.org for info.

The backs of the Portland playing cards are nondescript, with a string of leaves - so as to not give away the number and suit of the card. On the inside are the numbers, suits and scenes from Portland, including the Skidmore Fountain, old brick buildings on the east side, the old 'Portland' sign (formerly White Stag), Voodoo Doughnut and Powell's City of Books.

The cards are on sale at various places, including Powell's and Portland Art Museum, as well as online at aarontrotter.com. Trotter also sells them at his Saturday Market stand.

'I'm really promoting the city,' says Trotter, who has a studio on Northeast Alberta Street.

Trotter has always called the Portland area home, although he has traveled extensively, including Alaska, Florida, Asia, Australia, Central America, Cambodia and Thailand, doing drawings all along. 'This is like my retrospective,' he says.

The second half of his Architectural Heritage Center exhibit will feature original prints from the cities he has drawn, and decks of cards on display as posters.

Trotter put out the Portland cards about a year ago, thanks to a Kickstarter campaign. He has since added to the number of Portland drawings, totaling more than 200.

'I started drawing Portland places as a way to start a little greeting card business,' he says. 'I'd draw on location in sketch books and later embellish all the details. Eventually, I had over 50 drawings of Portland and I was thinking of a way to share my art with the public - it came to me one night, there were 52 cards in a deck.

'I've had 23 different versions. I've changed the back design, the borders and I get feedback from people about which places they want to see. It's been evolving over time and I finally got it nailed down.'

And, 'I've been learning about architecture as I've gone around drawing.'

'There are so many (locations) that I haven't drawn yet,' he says. 'People are always requesting places. I could just keep drawing Portland and never run out of interesting places to draw.

'It was originally broken up into two series of drawings, as famous landmarks and neighborhood places. The first deck had tourist places, the icons, the downtown landmarks; the second deck was more cafes, restaurants, parks, obscure and local places.

'That got complicated. I joined the two decks together for my ultimate Portland deck.'

He plans to add a new set of drawings in the next year.

In the meantime, Trotter is launching a line of chocolate cards with his drawing of the 'Portland' sign on a piece of chocolate the size of a playing card.